RADAR CHECK: Scattered showers continue over the northern third of Alabama this afternoon where the sky is mostly cloudy… South Alabama is enjoying a partly to mostly sunny sky under an upper ridge. Temperatures remain well above average, and a few spots have reached the 80 degree mark. As of this writing, Birmingham’s high so far today is 74, well short of the record high of 80 for the date, set in 1951.
Scattered showers remain possible tonight over North Alabama, and some dense fog is possible over the southern counties.

REST OF THE WEEK AND THE WEEKEND: Highs remain in the 70s for most of the state through the weekend. Look for a mix of sun and clouds each day with scattered showers possible, mainly over the northern half of the state. For weekend planning, expect more clouds than sun… odds of any one spot getting wet across North/Central Alabama both days are in the 50-60 percent range. But, it certainly won’t be a washout, and South Alabama will be generally dry.
NEXT WEEK: The weather won’t change much Monday and Tuesday… a few showers are possible around here, but the main action will be to the west, where severe storms are possible from Texas and Oklahoma over to Arkansas, Louisiana, and western Mississippi. Rain and storms reach Alabama Wednesday; for now SPC does not have any part of the state in a severe weather outlook due to limited instability, and the fact that the main dynamic support will be passing well to the north. But, the system is 7 days away, and needs to be watched closely since we are in tornado season.
A pattern change will bring colder and drier air into the state Thursday and Friday, and conditions are favorable for below average temperatures here through much of late December. See the daily Weather Briefing video for maps, graphics, and more details. 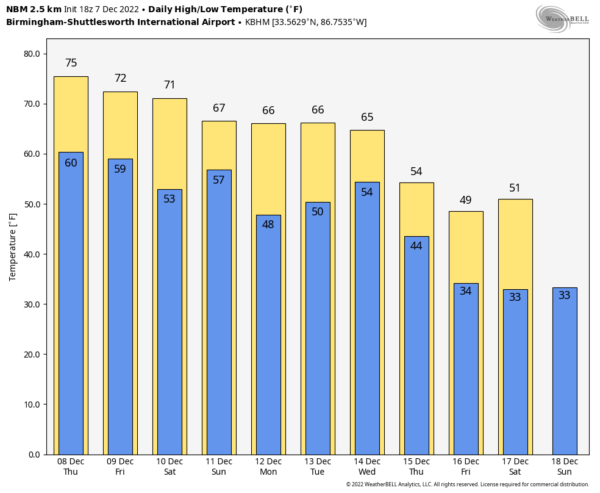 TROPICS: A large non-tropical area of low pressure located over the central subtropical Atlantic about 900 miles northeast of the northern Leeward Islands continues to produce a large area of showers and thunderstorms. This activity has become somewhat better organized this morning, though frontal features remain attached to the low. Environmental conditions appear marginally conducive for development and a subtropical or tropical storm could form within the next day or so. By Friday, the low will move northeastward over cooler waters and interact with a mid-latitude trough, limiting the chance for additional subtropical or tropical development of the system. It will remain far from land.
ON THIS DATE IN 2004: An F2 tornado tracked for eight miles across parts of rural Lowndes County, MS, and into Lamar County, AL. The worst damage occurred near Steens, MS, where several homes were ripped apart, a trailer was destroyed, and numerous trees were knocked over.
ON THIS DATE IN 2006: A rare tornado tore through Kensal Rise in London. This T4 on the TORRO scale, equivalent to an F2 on the Fujita scale, injured six people and damaged 150 homes. According to the BBC, the last tornado which caused significant damage in London was in December 1954, in West London.
BEACH FORECAST: Click here to see the AlabamaWx Beach Forecast Center page.
Look for the next Weather Briefing video here by 6:00 a.m. tomorrow…
Tags: ANC, featured, warm
Category: Alabama’s Weather, ALL POSTS, Weather Xtreme Videos
If you enjoyed this article, subscribe to receive more just like it.